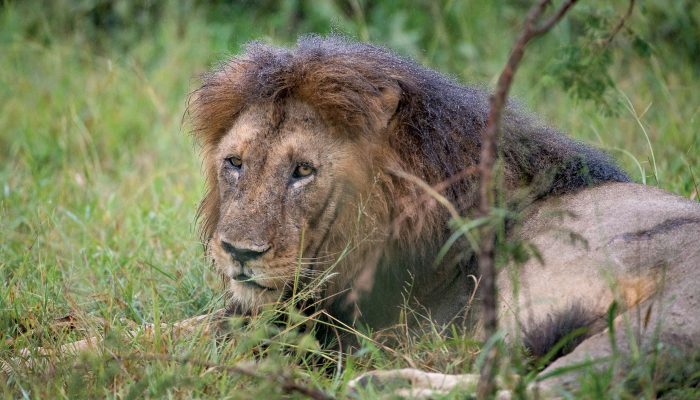 The last 2 weeks have been incredibly interesting in the Manyeleti, especially with regards to the Lion dynamics on the reserve. The last 2 weeks has seen the return of the original bad boys of the Manyeleti….. the 2 southern Matimba’s have returned to their old stomping grounds. This naturally has had a profound effect on the movement of the local Lion prides, and of course the Thanda impi male Lions, who now rule the area. On the 19th of February, we were very surprised when we located an old male Lion with a Buffalo kill on Xiskankanka road. We identified him as the hairy belly Matimba male. The scary part of it all was that he was probably only a few kilometers from where the Mbiri pride had their cubs. Luckily, the Thanda impi’s had thus far been pretty good pride males, and were concentrating their activities around the area. 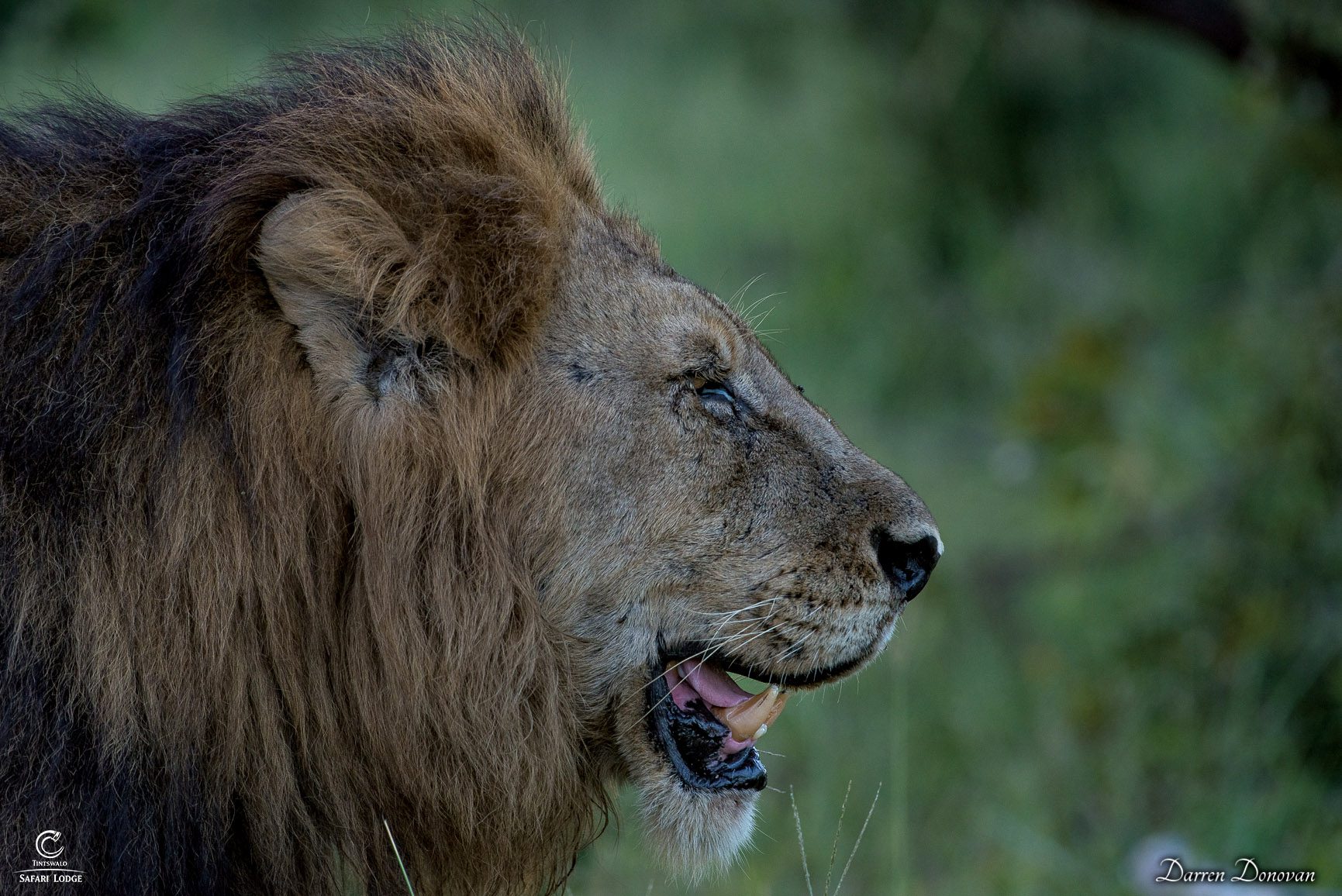 We were very surprised by the sudden arrival of the hairy belly Matimba male Lion. Despite his age, he still looks in very good condition. ISO 1000, f7.1, 1/200sec 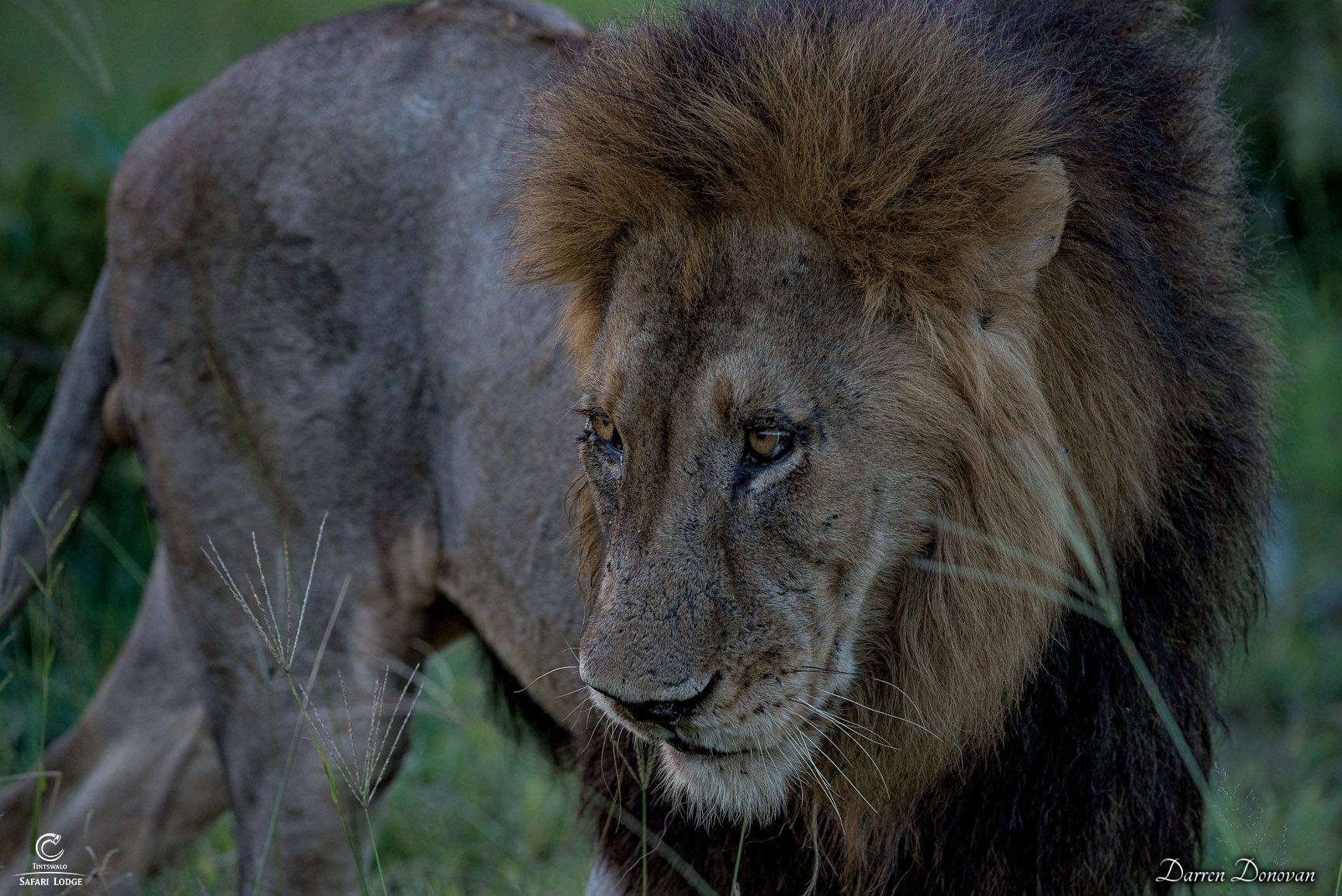 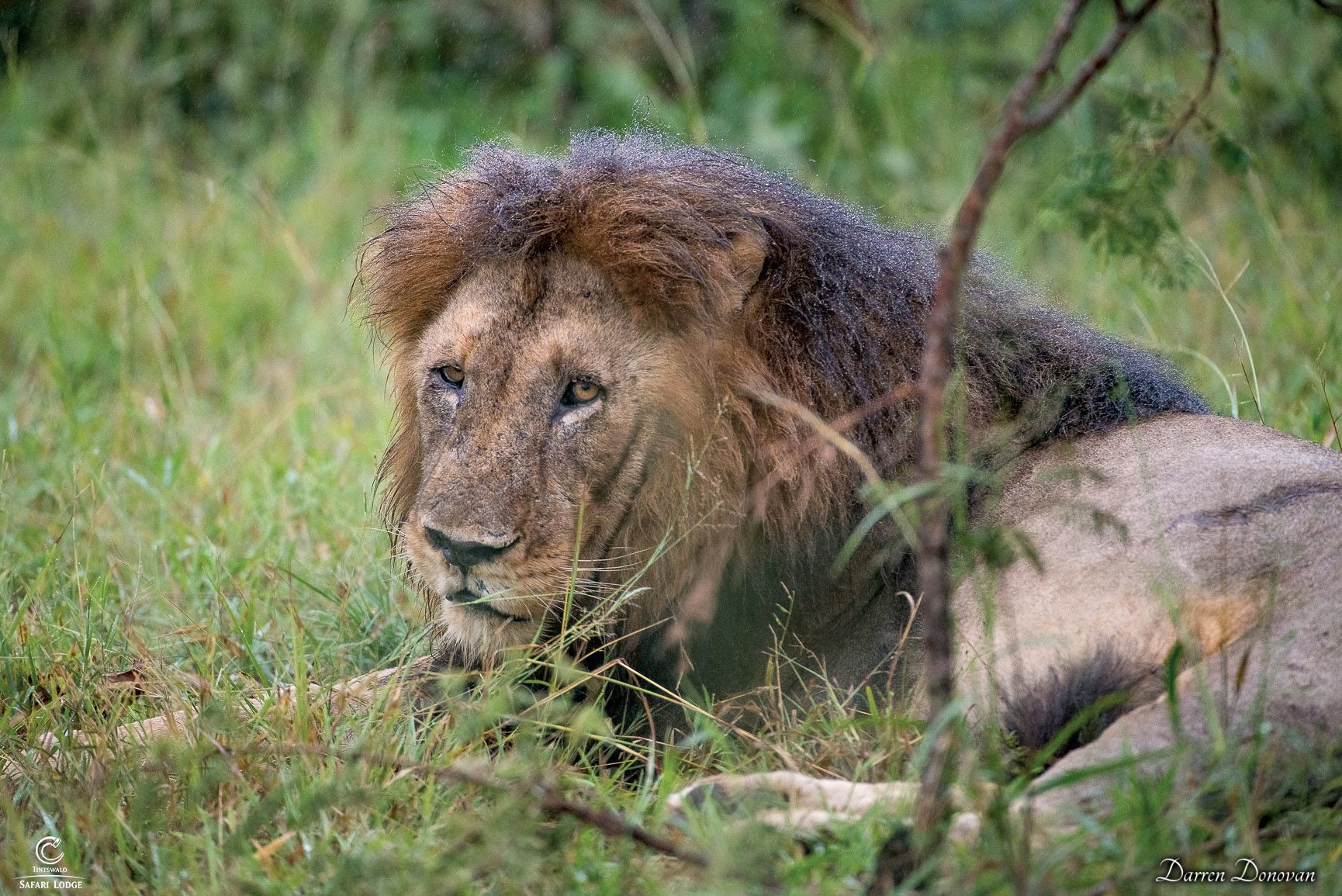 At first, it was quiet and it seemed that the Matimba’s had moved on. The Skorro Thanda impi male was roaring around the airstrip, obviously he had become aware of a threat, but nothing came back at him. From what I can remember of the Matimba’s, not responding would be totally out of character, so they must have moved on. And then the roaring from the Matimba’s started. They had stealthily moved towards the Wild dog dam area, even closer than before. These were warriors with experience! The Thanda Impi’s had their back turned, and were feeding on a Buffalo to the north on Vulture pan road. The Mbiri pride were wide open, and there for the taking. Then our worst dreams came to pass, the matimba’s came past the lodge, moving north and violently roaring as they went. They were moving straight to the Mbiri pride at Zebra pan. We tracked the matimba’s as far as we could, but unfortunately we lost the tracks in the thick grass. The Mbiri Lionesses however, are also experienced, and they had moved their cubs further north to Catwalk west, a thicker and deeper drainage line, with more place to hide. At this point, Skorro male came to his senses and immediately joined the Mbiri pride, and for several days wouldn’t leave the pride. 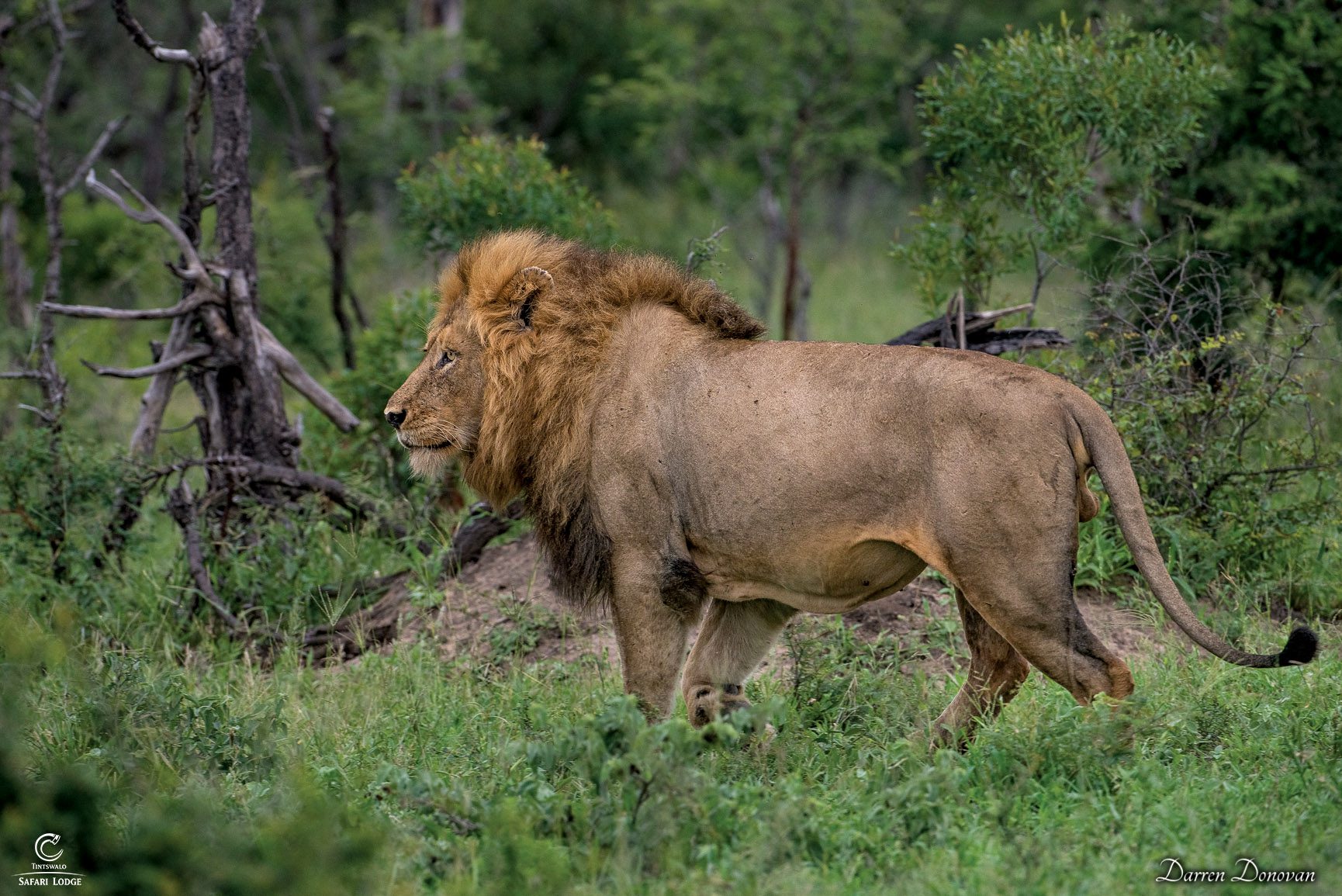 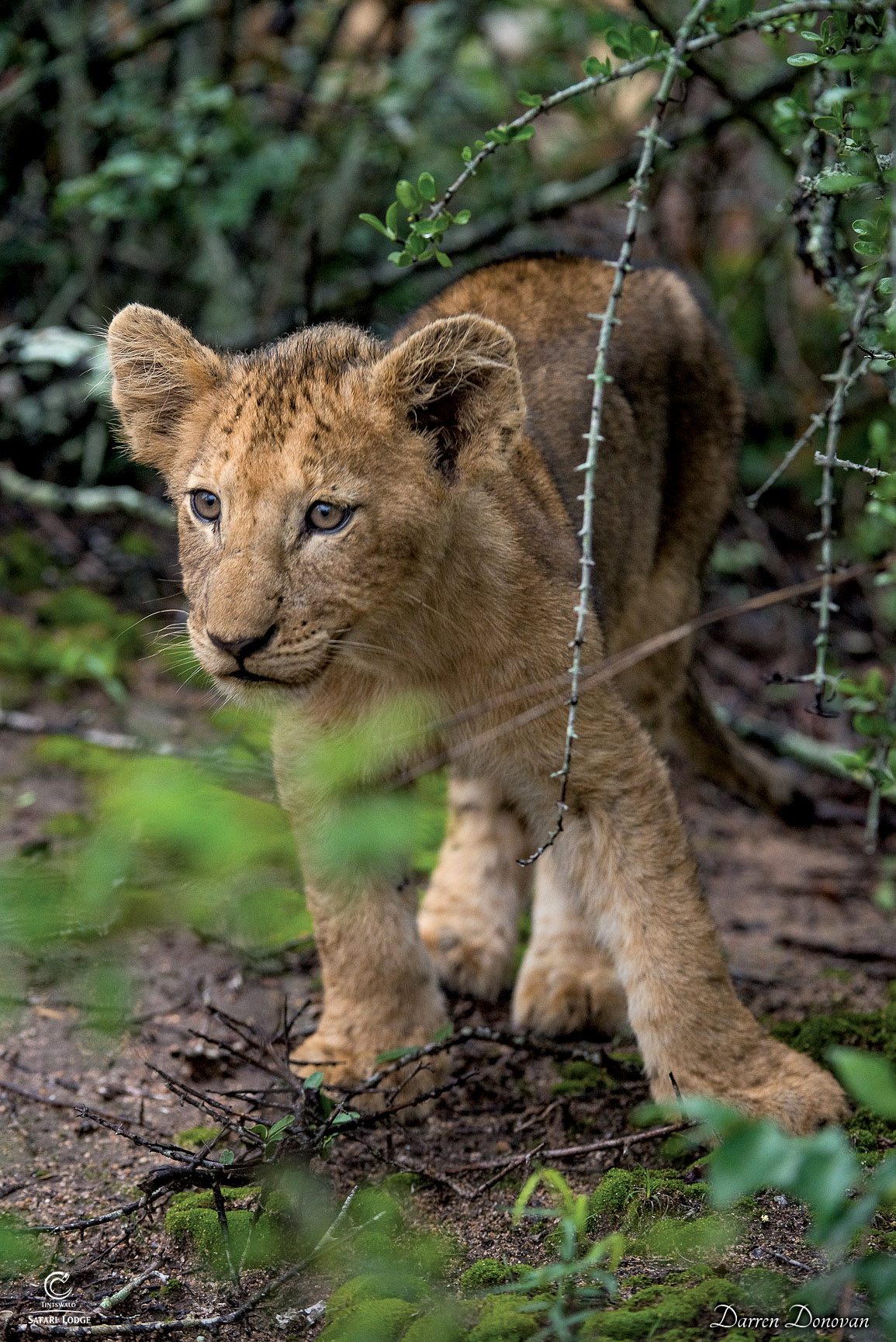 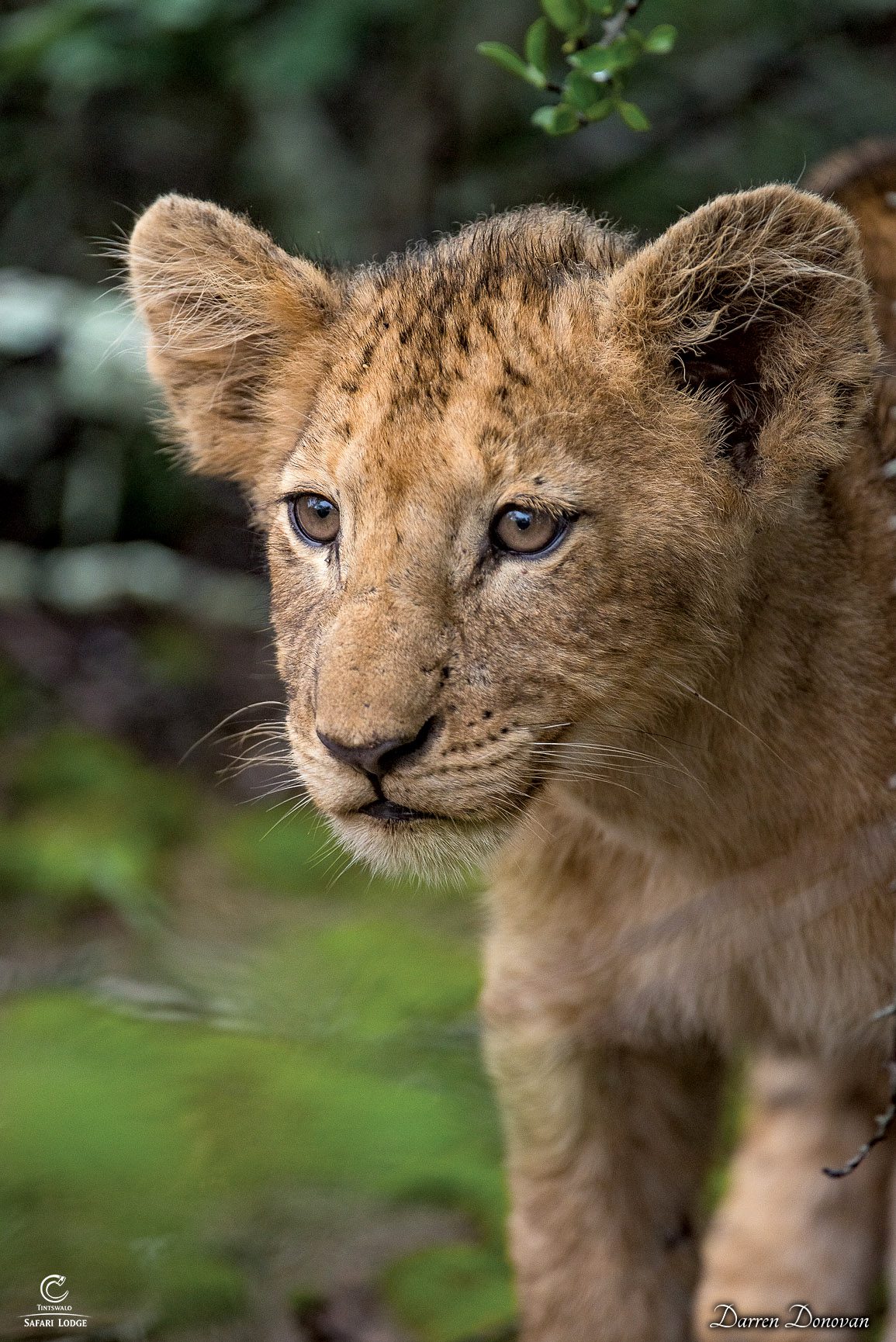 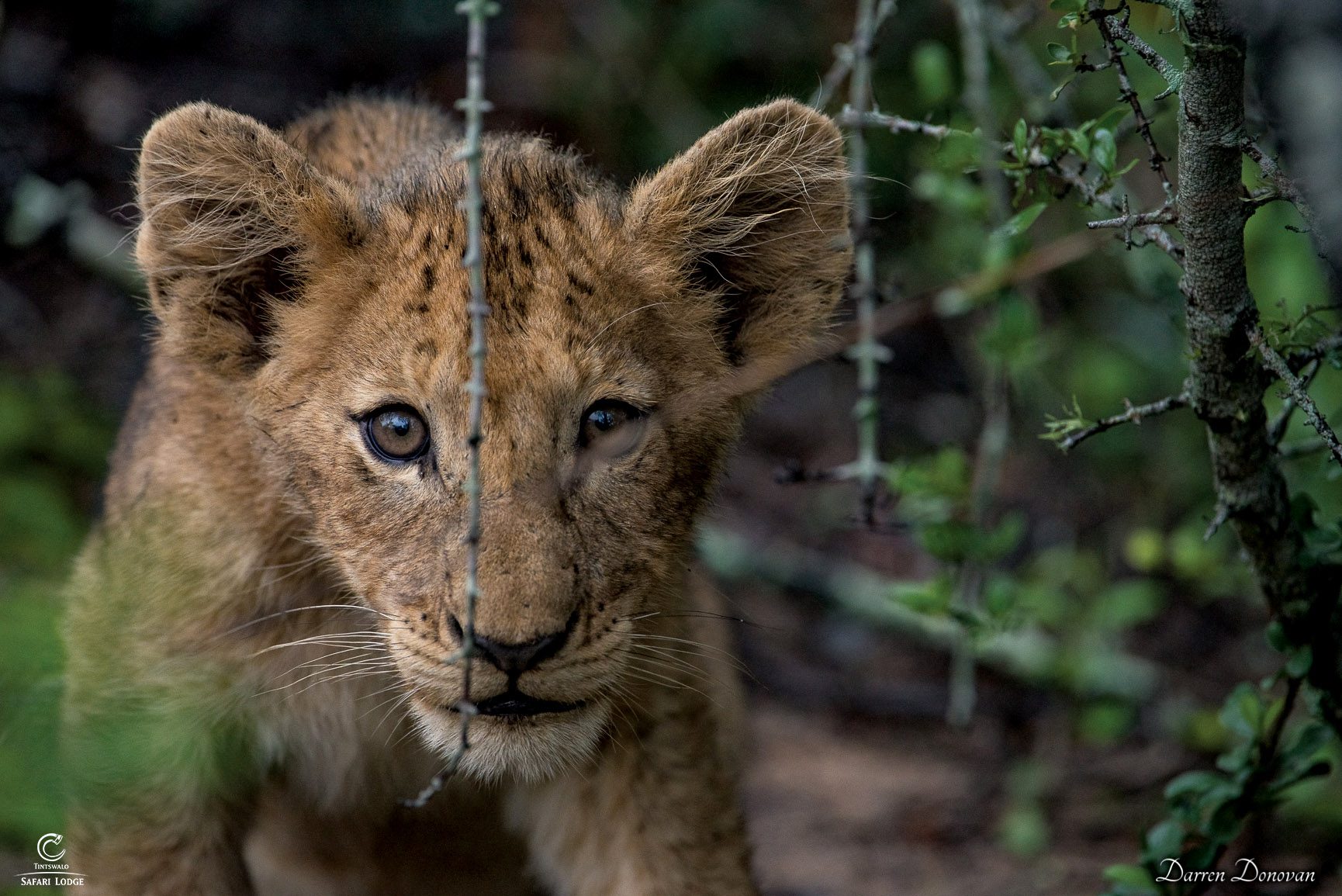 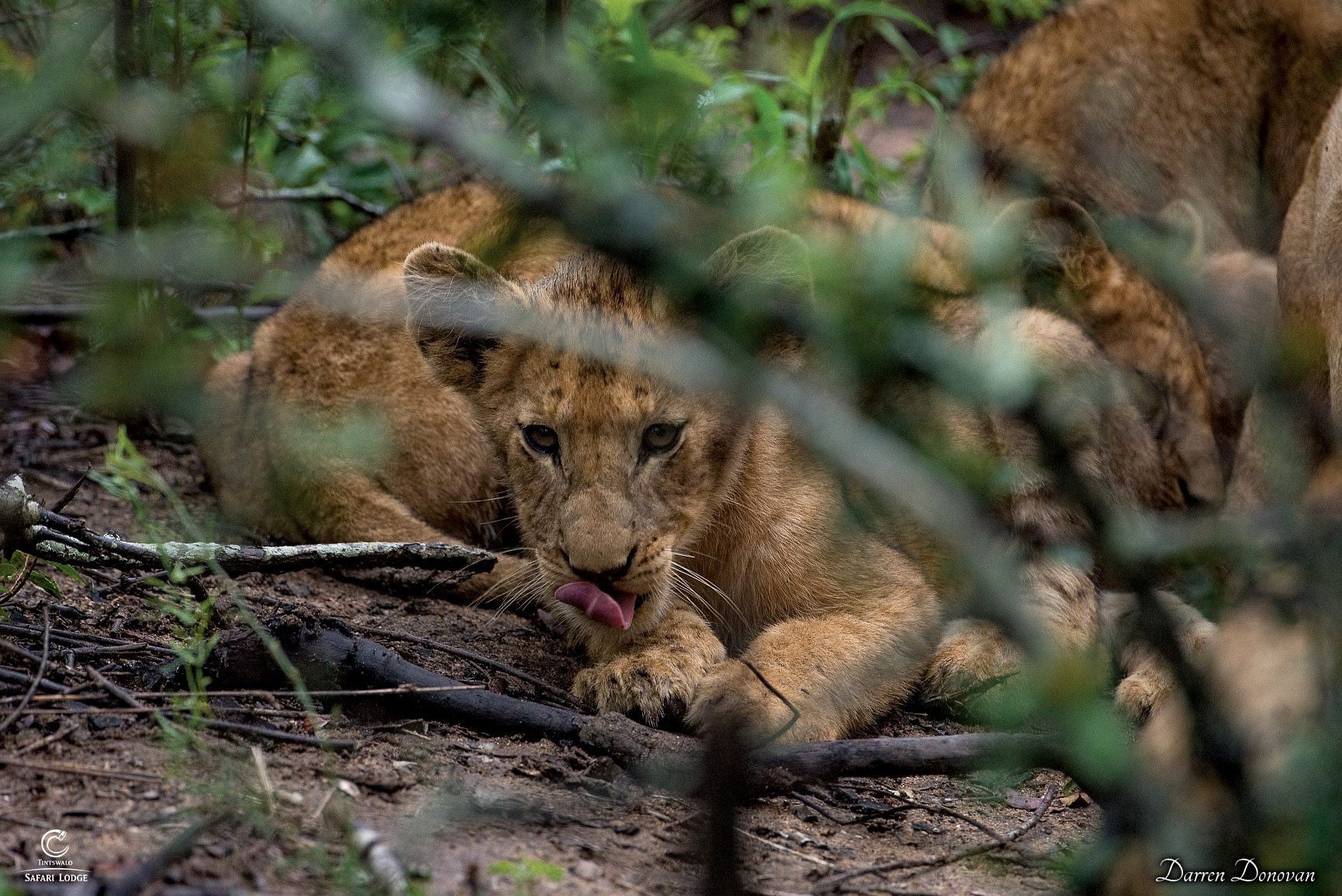 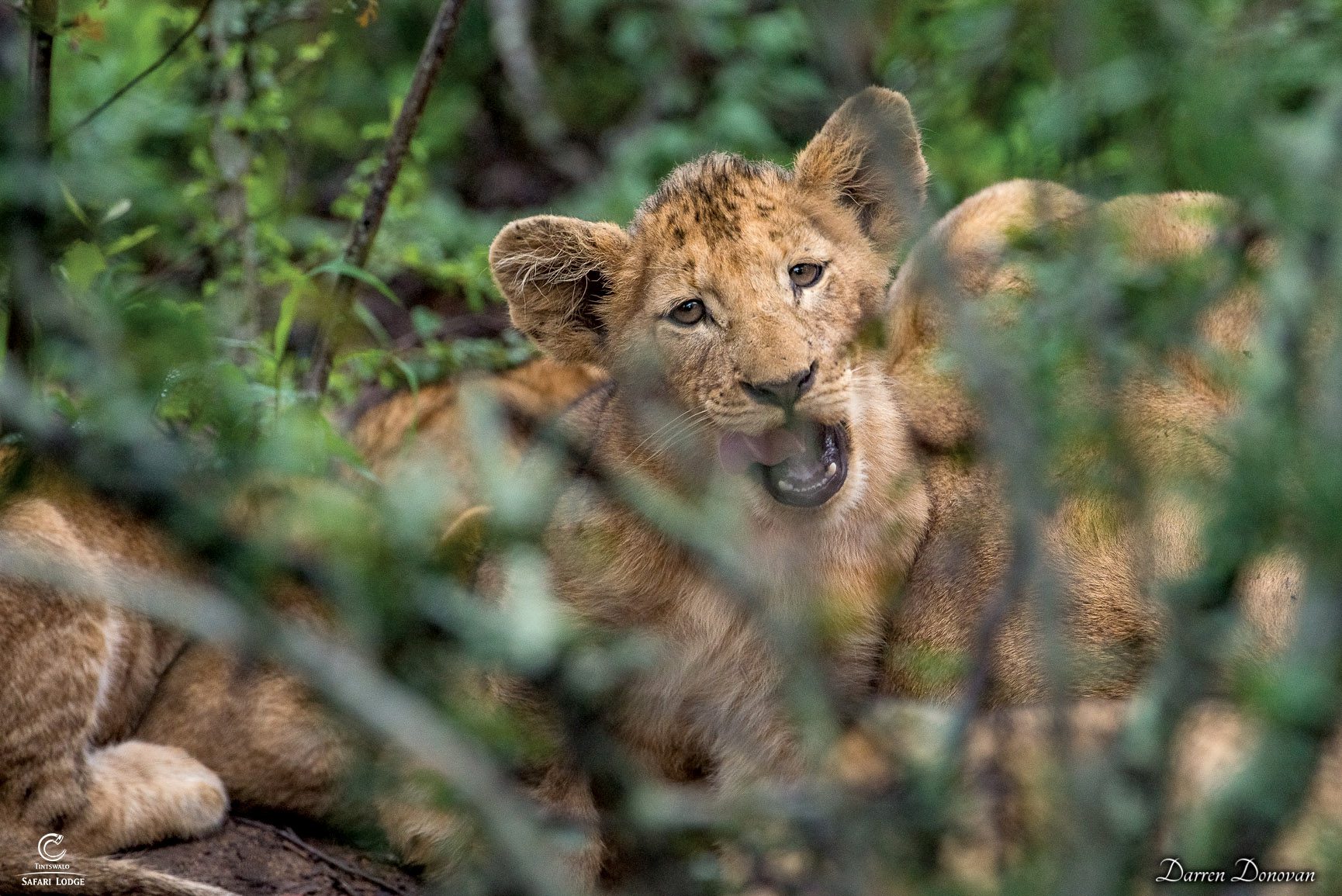 This seems to have done the trick, and the Matimba males moved back to the south and were located a few days ago on Scratches plains. Are they just listening? Or have they discovered that the Nharhu pride is currently moving without any males? These seasoned warriors have done this dance before, and i’m sure they know what they are doing. A famous quote by Leo Tolstoy puts it perfectly into perspective ” The two most powerful warriors are patience and time”. On the other hand, Skorro Thanda Impi has successfully managed to put a barrier between the Matimba’s and the Mbiri pride. And the Mbiri’s themselves wisely created the necessary distance, not allowing themselves to be caught. The only casualties in this current drama we believe are the 3 youngest Mbiri cubs, that were found only a couple of weeks ago, close to Zebra pan and were still unable to walk. The mother has since been seen with the pride, and no cubs to show. Hopefully she managed to get them out in time. 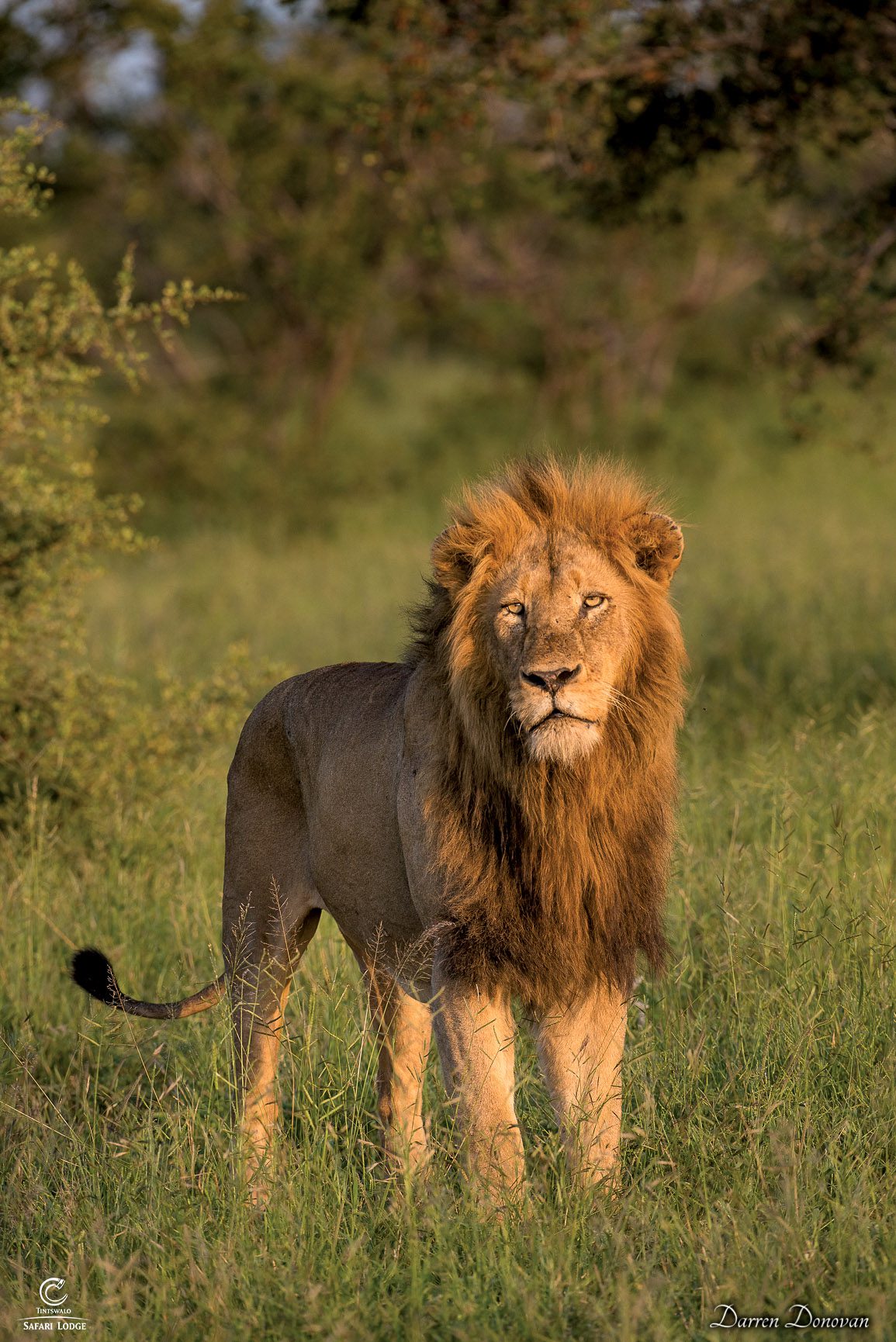 Its going to interesting to see what happens in the next few weeks.

Text and photography by Darren Donovan